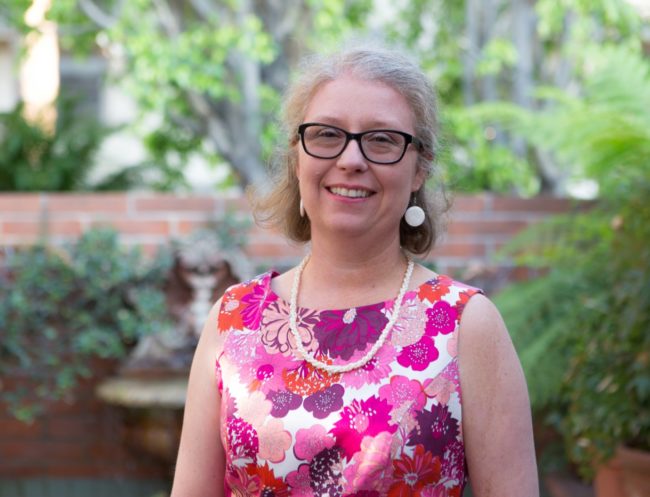 The Pasadena Community Foundation is pleased to announce the second annual $50,000 Dr. Robert Fefferman Award for Excellence in Math and Science Education. Michele Manzanares (pictured above), a science teacher at Blair High School, was chosen as the recipient of a $25,000 cash award. In addition to the $25,000 unrestricted gift to the teacher, the Fefferman award also benefits the teacher’s school with a $15,000 grant to the Blair science department. Two Blair senior students – Mariah Dimalaluan and Julia See – will each receive a $5,000 college scholarship for outstanding performance in math or science.

The Fefferman Award seeks to acknowledge outstanding high school math and science teachers and students within Pasadena Unified School District.  Each of the four other teacher finalists received a certificate and $1,000 for their excellence.

The winner of the 2016 Fefferman Award was announced at a dinner on Wednesday, May 4. The dinner was attended by the five finalists, the Fefferman Selection Committee, Pasadena Community Foundation staff, Superintendent Dr. Brian McDonald, Mayor Terry Tornek, principals Tim Sippel from Muir, Mark Anderson from Marshall, Trudell Skinner of Blair and Gilbert Barraza of PHS, and several other members of the Pasadena Community.

The winning teacher, Michele Manzanares, was announced by Dr. Robert Fefferman, visiting from Chicago for this event. Ms. Manzanares, sitting next to her husband and principal, became emotional as the award was announced. She gave a special thanks to her wonderful students.

Michele Manazares, who received an outstanding statement of endorsement from Principal Skinner, began teaching at Blair in 2000. She has taught a wide range of classes from AP Biology to Life Science. She herself was inspired by teachers in high school and pursued this career to “open [students] eyes to the wonder of science.”

Not only does Ms. Manzanares push her students to succeed, she is always looking for ways to better herself, to support her community, and to play a leadership role at Blair. She leads the Blair Health Careers Academy, where she does not settle for letting her students be average. Michele believes her students can excel to the highest ranks of the health and science fields. During the selection committee’s visits to her classroom she exhibited not only an outstanding grasp of her subject, but an unusual knack for bringing out the best in her students and encouraging participation and engagement.

After reviewing applications the Selection Committee chose five finalists made two classroom visits to each finalist, and conducted in-person interviews with each teacher.

This award is made possible thanks to an anonymous donor, who believes that outstanding educators inspire students to pursue a higher level of math and science education; and that students who are inspired to pursue jobs in the fields of math and science can help both the local Pasadena community and the larger world. Science and math education strengthens skills in critical thinking, problem solving, and creative reasoning. These learned qualities allow students to succeed academically, as well as in other economic and personal endeavors. The Fefferman Award is intended to reward and inspire excellence in math and science teaching at the high school level.

Dr. Robert Fefferman is the Max Mason Distinguished Service Professor of Mathematics at the University of Chicago. His work includes research mathematics, teaching, and service to his University and to the community at large including the Chicago Public Schools. He is an inspiration to many, including the donor who named the award in his honor.

Sumita Luthria began teaching in 1982 in Mumbai, India. She came to PUSD in 1994 as a substitute teacher and has been working at Muir since 1996.  She served as head of the math department for two years, Math Field Day coach, and class advisor. In 2014, Stanford University selected Ms. Luthria to participate in the Project Summer Scoring Institute, Innovative Lab Network Performance Assessment. She also completed the Stanford University SCALE program. Sumita Luthria truly cares about her students and routinely goes above and beyond the call of duty to ensure that her students excel.  Sumita Luthria was a 2015 finalist for the Fefferman Award.

Jose Herrera has taught within PUSD since 1990 and at Pasadena High School since 2006. With a Bachelor of Science from Stanford University and a Masters of Education from Claremont Graduate School, Mr. Herrera has both the academic background and many years of experience that make a great teacher. Jose Herrera exhibits a great deal of compassion for his students while still keeping his expectation high. He wants them to leave his classroom not only with an understanding of the mathematical formulas and algorithms, but about how math can be used to solve complicated problems both in school and in the real world.

Richard Eric Mulfinger began teaching in 1986 and came to Marshall Fundamental School in 1998. Mr. Mulfinger has always played an active role in the school, serving as Math Department Chair, Advanced Placement Coordinator, Chess Club Coordinator, and Cross Country coach, among other activities. Selected as a National Board Certified Math Teacher and Pasadena Rotary Teacher of Excellence, Mr. Mulfinger is always looking for innovative ways to improve and routinely enrolls in professional conferences and institutes. Mr. Mulfinger was a 2015 finalist for the Fefferman Award.

Bharatchandra Parekh has taught within PUSD since 2007 and at Muir High School since 2010. A passionate teacher to say the least, this individual goes to great lengths to ensure his students’ success. From a summer mathematics enrichment course, to weekend teaching sessions, to visiting other classes as a math coach, Mr. Parekh dedicates a full schedule to ensuring his students’ success. With very high California High School Exit Exam pass rates and a classroom environment that successfully encourages participation, Mr. Parekh is a great asset to PUSD. Bharatchandra Parekh was a 2015 finalist for the Fefferman Award.