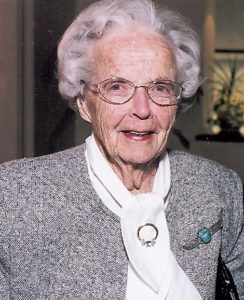 Libby Lent wrote a letter in 2003 to the then new Executive Director. Libby had enclosed a check and thanked Jennifer DeVoll for the opportunity to become a Fellow. She went on to say that the Pasadena Community Foundation (PCF) was “mentioned in her estate plan.” Ten years later, in 2013, Libby passed away at the age of 99. Her bequest to PCF has become the Elizabeth Lent Endowment which will contribute to PCF’s local grants, creating a legacy for the place Libby called home for over 50 years. (2016)