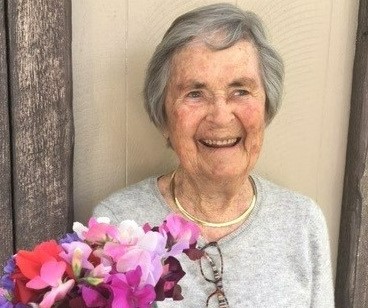 Longtime Pasadena resident Marvel B. Kirby passed away in early 2021 at the age of 90. In her bequest to PCF,  Marvel chose to honor six friends with close connections to Pasadena and who shared her ethos of service and generosity. Each will have a named endowment established that will support causes important to them. Nevill McInerney passed away not long after Marvel, and her life of service will be honored with her own endowment.

Spirited, adventurous, and accomplished, Nevill Ann Dunn McInerny was a one-of-a kind member of the Greatest Generation, a woman with incomparable originality and a megawatt smile. She was loved not only for her sense of fun and adventure, but also for her kindness, warmth, and innate ability to make people feel special. Nevil passed away in the spring of 2021 at the age of 93, and her endowment will support PCF’s local grantmaking in the areas of Environment & Animal Welfare, Health & Safety, and Human Services.

Always up for Adventure and Exploration

Nevill’s originality began with her name. It was the surname of her paternal grandmother, who was born in London (1866) and related to British aristocracy, including the Spencer Churchill clan. Lady Diana Spencer was her fourth cousin. However, Nevill was never impressed by her lineage: She was down to earth and devoid of pretense.

She was born in 1927 in San Francisco but soon moved to Altadena, California with her parents and two siblings. It was here, in the San Gabriel Mountains foothill 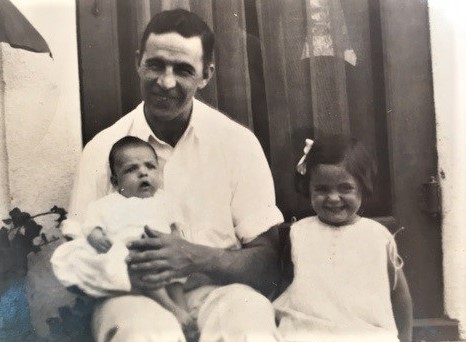 community, that she developed her strong sense of independence and adventure. She spent her days exploring the trails, climbing trees, and wading in the creeks near her childhood home on Homewood Drive. She once owned a donkey and befriended an owl, but her most treasured companion was her Pointer dog, who joined her in exploration. She was an avid equestrian and was known to walk all the way to Eaton Canyon Stables in order to ride.

Nevill attended Mayfield School and South Pasadena High School (class of 1944) and next enrolled at Cal Berkeley, where never got around to graduating but counted her great fun with friends and her introduction to skiing as her achievements during this period. In 1950, her love of adventure led Nevill to work in the airlines, first at United and later with Pan Am. During this time, she ran into Bob McInerny, whom she had met years prior at San Onofre Beach. They married in 1952.

Bob loved the beach while Nevill loved the mountains, so they split their time between Pasadena and St. Malo Beach in Oceanside. She raised her five children — one girl and four boys —  in both places and loved being their mom. She threw herself into all kinds of activities and sports, from Little League to tennis to track, football, and basketball. As the chidden grew and her free time expanded, she traveled the world with Bob, volunteered at Children’s Hospital Los Angeles and the Pasadena Art Alliance, and with the help of two friends, established the Sadler Merrill Company, an antiques and decorating business.

Perhaps her greatest personal passion was following and investing in the stock market. She was self-taught, subscribed to “Value Line,” and eventually set up the retirement plan for her husband’s insurance business. She joined an investment group with other women friends and was a natural on the computer even into her nineties.

A Legacy of Empathy and Compassion

For Nevill’s daughter Kate, her mother’s lifetime of empathy, compassion, and concern for those who struggle is her legacy. “She was the mom all kids could go to when they couldn’t go to their own, and she was beloved for this. She was a quiet advocate for the lost and struggling. Anyone, without exception, who came into Nevill’s orbit experienced a magical sense of inclusiveness and importance. Her charm was undeniable. She was interested in others, a good listener, and the most supportive friend imaginable.”

“My mother would have been so deeply honored to know she has an endowment in her name. It would bring her to tears! She would take to heart the social value and potential such an endowment presents. In PCF’s hands, we know that this endowment will support the things Nevill most cared about: her compassion for social welfare issues, her beloved San Gabriel mountains, and animals.”

The Power of Endowment
Endowments are the cornerstone of PCF’s mission to build hometown legacies. The corpus of each endowed fund is invested with PCF’s portfolio for long-term growth. Each year, the endowments generate the funds that support PCF’s local grantmaking, which enriches the arts community, protects our environment, provides health care and critical social services, and bolsters public education in Pasadena. Endowments are permanent legacies for our community; these funds will continue to grow and provide philanthropic support forever. Become a PCF Endowment Builder.