Longtime Pasadena resident Marvel B. Kirby passed away in early 2021 at the age of 90. In her bequest to PCF,  Marvel chose to honor six friends with close connections to Pasadena who shared her ethos of service and generosity. Each will have a named endowment established that will support causes important to them. Rosemary “Rary” Simmons is one of the honorees.

A lifelong Californian and a 67-year resident of San Marino, Rosemary “Rary” Simmons can count decades of selfless service and charitable work among her accomplishments. Her love of the arts, commitment to healthcare, and an ethos of giving back has been her driving motivation.  A conversation with Rary leaves one wondering not where she has volunteered her time, but where she has not.

Rosemary Bernheim was born in Los Angeles on February 17, 1931, and attended grade school and high school in Beverly Hills. In 1953, she graduated with a degree in psychology from Occidental College, following in the footsteps of her stepfather and his brothers. The campus’s Stearns Hall was funded by Rary’s family, who also established endowed scholarships that now support more than 30 students. She has been giving back to Occidental since her graduation: Her first gift, to the Oxy Fund, was $5. Today, Rary is an Oxy trustee emerita.

During the summer of 1948, Rosemary met Frank Simmons on Balboa Island, and they were married on June 6, 1952, in Beverly Hills. They settled in San Marino in 1954 at which time they started their ever-growing family and their shared lifelong commitment to their community. Rary still lives in the San Marino home the couple purchased in 1956.

A Glass-Half-Full Volunteer, Public Servant, and Board Member

As a self-described “glass half-full person,” Rary leveraged that optimism to play an active role with numerous charitable organizations. Some highlights of her work include joining the Pasadena Junior Philharmonic in 1962 (later the Pasadena Showcase House for the Arts) and becoming the cleaning woman at the first Showcase House in 1965. She later became Showcase House Chair and then its President. Concurrently, she served as Room Mother for each of her children, was a member of each of the PTA boards, and ultimately served as the President of the San Marino PTSA Council. Along the way, she served as Grad Night Chair, one of her favorite endeavors.

In 1982, she was selected to fill a vacancy on the San Marino City Council.  She was the first woman council member and, in 1986, became San Marino’s first woman mayor.  Rary served on the City Council until 1992, at which time she was asked to become a member of the Huntington Hospital Board, where she is still active today as the first Emerita member.  She is also an Emerita member on the Occidental College Board, having served there for 26 years.  Among her favorite volunteer jobs was the opportunity to serve as schedule person for the volunteers at the L.A. Coliseum Hospitality tent during the 1984 Olympics.

Numerous additional board and advisory committee roles round out her resume, including Cancer Support Community Advisory Board, San Marino’s Hill-Harbison House, Hathaway-Sycamores Child & Family Services (now known as Sycamores), and the Advisory Board for Hillsides. She also served as an advisor to the Pasadena Senior Center, where she was honored at the 2018 Zest event that highlights “aging well.”

“Help Where Help Is Most Needed”

Rary emphasizes that while the arts and health care have always been her passions, she wants to ensure that funds from her endowment support community needs as they vary and change. “”I favor unrestricted giving, especially in the arts and health fields, but hope to use my fund to help where help is most needed.” 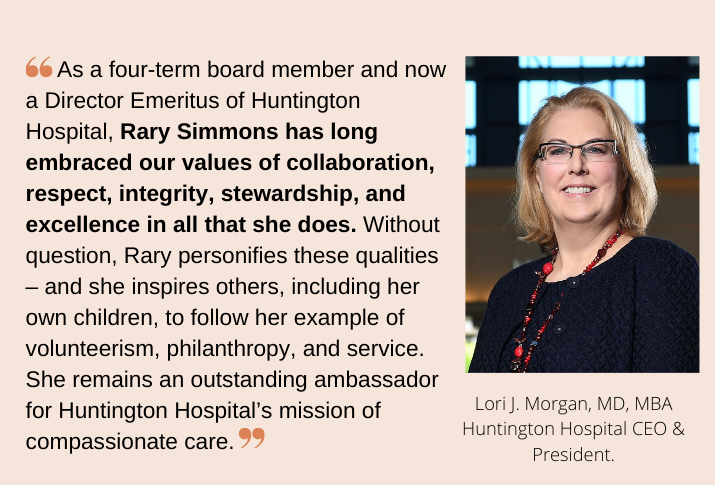 The Power of Endowment
Endowments are the cornerstone of PCF’s mission to build hometown legacies. The corpus of each endowed fund is invested with PCF’s portfolio for long-term growth. Each year, the endowments generate the funds that support PCF’s local grantmaking, which enriches the arts community, protects our environment, provides health care and critical social services, and bolsters public education in Pasadena. Endowments are permanent legacies for our community; these funds will continue to grow and provide philanthropic support forever. Become a PCF Endowment Builder.