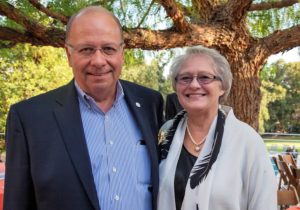 Pam and Les met in college and soon after, moved to Altadena. Pam became a music teacher at High Point Academy, a mom to their three daughters, and a regular volunteer at Huntington Hospital. There are now three grandkids who keep her quite busy. Les worked at the Braille Institute of America where he had an amazing 35-year career. As President of the organization, Les helped to dramatically expand operations in Southern California. Les is currently at the Caddis Consultancy, providing consulting services focused on improving sustainability for non-profits. He is also working with Third Sector Company, devoted to succession planning in the non-profit sector. Last year he served as interim Executive Director at the Cancer Support Community in Pasadena.

Pam and Les are both absolutely passionate about giving back to the community. They have been impressed with the role of the Pasadena Community Foundation, and how the organization is able to identify the non-profits in Pasadena that are making a genuine impact in the community. “After we are gone,” said Les, “we want an organization to make the most relevant decisions each year as to where to allocate the funds, and PCF has proven to be the agency most capable of doing that.”