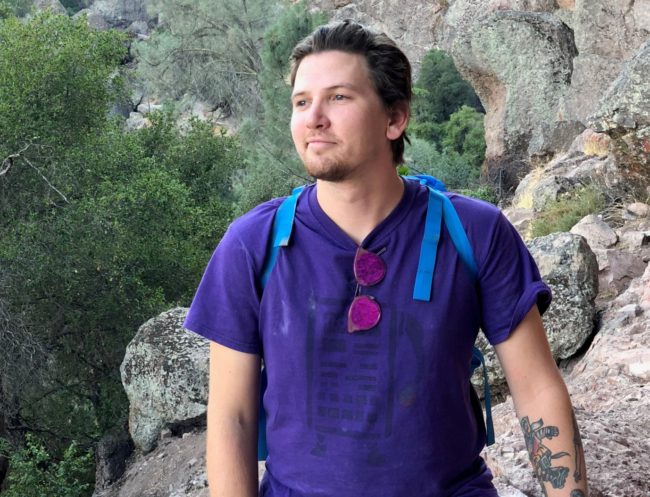 Walker Wesley was born in the close-knit foothill town of Sierra Madre – a place that proved instrumental in nourishing his exceptional skills and passions while also fostering a deep connection to his community.

Walker died unexpectedly in March 2021 at the age of 31. To memorialize his legacy, his parents, Fred Wesley and Alison Snow, turned to Pasadena Community Foundation to establish The Uookaa Foundation (pronounced “wah-kah”). At the heart of The Uookaa Foundation is Walker’s inquisitive love of people and cultures, as well as his abounding passion for music, art, and the outdoors. With PCF’s help, its charitable support will focus on three areas: Arts & Culture, Youth & Education, and Environment & Animal Welfare.

Walker was a product of Sierra Madre and Pasadena schools, beginning with his enrollment in Sierra Madre Community Nursery School, followed by grade school at Sierra Madre Elementary. His teen years were spent at Arroyo Pacific Academy and Pasadena High School. As he grew up, Walker leant his enthusiasm and skills to numerous school activities — Odyssey of the Mind and Math Field Day among them — and volunteering with the Sierra Madre Library, Bailey Canyon Park clean-ups, Foothills Creative Arts Group, the Sierra Madre Art Fair, and much more. His mother, Alison, says, “Walker loved that in Sierra Madre, he could live a small-town life while also having a readily accessible connection to LA’s creativity, diversity, and action.”

Walker’s passion for the arts and creative problem solving were cemented during these years, as was his remarkably large, close-knit friend circle. Friendship and inclusion were Walker’s driving passions, and while he was comfortable talking with anybody, he enjoyed listening even more. “Walker was a people person to his core. He had an irrepressible curiosity about people and cultivated close friendships wherever he went,” Alison says.

Sierra Madre’s natural beauty and the wild places that abound in Pasadena and throughout Southern California also found their way into Walker’s soul. He loved to hike and camp in California’s High Sierras and the Redwoods, the mountains of New Mexico, and Baja California.

Walker’s keen interest in humanity and cultures led to his study of Cultural Anthropology at UC Santa Cruz. He became a DJ at the campus public radio station, KZSC, and leveraged his well-developed expertise in music and extensive vinyl collection. His listeners loved his eclectic programs that showcased music spanning genres, time, and geography. Travel was another way Walker invested in cultures and people: He leveraged his Japanese skills and traveled to Japan; additional trips included Mexico, the UK, Canada, and Hong Kong.

Walker also held a deep appreciation for contemporary modern art, architecture, street art, and anime. He embraced color, design and often looked like a “walking museum” with artistically designed clothing that referenced his travels, concerts, or artists and museums that he loved; he also learned to silk-screen some of his own designs. Eventually, Walker extended his experience in the arts to a career in the film industry, specifically focused on props, and found success with several television shows.

Walker touched many people with his positive energy, kindness, sense of humor, and fun-loving nature. Pasadena Community Foundation is proud to help honor his life and encourage charitable support for the causes he loved. Fred and Alison will host an intimate memorial gathering for Walker in mid-August.

The Uookaa Foundation has raised nearly $70,000 since its establishment, and Walker’s family hopes that total will soon reach their initial goal of $100,000 so that funding for their chosen causes can begin.

Help the Wesley family honor Walker’s impactful life with a donation to The Uookaa Foundation.