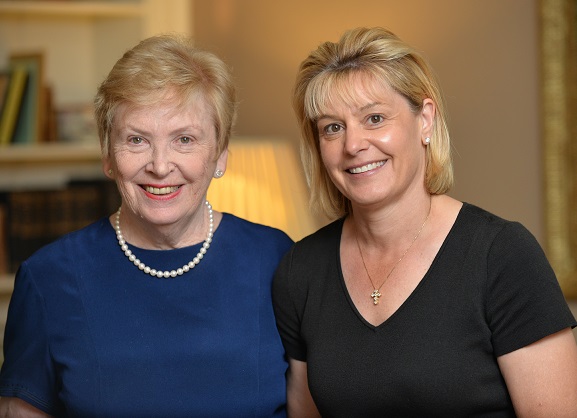 After Board Chair Judy Gain welcomed the 145 guests, Jennifer DeVoll, Executive Director, announced PCF’s “Be One in a Hundred Campaign” had surpassed its goal and PCF now holds 102 named endowments that support grants to Pasadena-area nonprofits. Kimberly Ebner, the 100th endowment builder, was present to celebrate the milestone (pictured above with PCF Development Director Judy Wilson).

DeVoll noted that “A Named Endowment can be established for $10,000 creating a permanent legacy to support the Pasadena community.”  The collective value of these endowments is over $26 million.

PCF also announced a new $6 million fund to be created through a “merger” with the Pasadena Child Health Foundation (PCHF).  Gloria Pitzer, PCHF Board treasurer shared the story of a trust established in 1928 by Pasadena resident Julia Bundy Blue with 500 shares of IBM stock.  That trust ultimately distributed $25 million to five local charities including PCHF.

Finally, Les Stocker, PC Board member shared the news that PCF was now licensed to offer Charitable Gift Annuities, a giving tool that would benefit both local donors and local non-profits.

Together with its donors, PCF has awarded more than $78 million in total grants in its 63-year history.