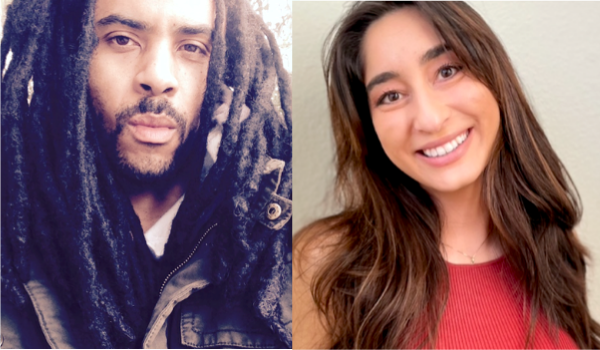 John Clay III (pictured top left) has deep roots in Pasadena. Since the 1940s, his family has been Pasadena residents; John was also born and raised in the city. He attended local public schools Loma Alta Elementary, Eliot Middle School, and graduated from Muir High School.

In 2014, John met Pegah Sharestani (top right), and they connected because of their passion for education. The friends soon turned their attention toward two business ventures: developing their Orbit Broadcast Network (OBN), a proprietary streaming service, and MASKLA STUDIO, an active wear and digital design company.

As business partners, John and Pegah were mindful in creating a charitable ecosystem within their businesses: Using their own OBN platform, they recently launched their Orbit Education Fund (OEF), which provides free remote tutoring, taught by teachers, to students in grades 3-12. To support the operation of their OEF project, the entrepreneurs direct 40% of each MASKLA STUDIO purchase to the cause.

A Calling to Give to Pasadena Causes

John’s generational roots in Pasadena also provided a strong charitable calling.  “Pasadena is my home, and I wanted to give there. Kids of my friends, my nieces and nephews, they all attend Pasadena schools, and I wanted to help strengthen that district.” For the business partners, the question then became how could they target their giving and find an avenue that would have the most impact.

The answer, they decided, was to embark on a fact-finding mission and go directly to local, on-the-ground sources. They visited several community centers, dropping in to chat with staff members and learn more about neighborhoods, schools, and community needs. Pegah remembers “a big part that spoke to us during our interactions with the community centers was that many of them referenced Pasadena Community Foundation and were aware of the impact that PCF has had in the community.”

Pegah next dropped in on PCF and learned about the Foundation’s various options for charitable giving. “PCF clicked for us. We liked the way we were treated. This is our first foray into the charitable world, and we had tons of questions. PCF’s staff followed up with us and were so helpful.”

Venturing into Charitable Giving with a DAF

With PCF, the friends decided to create the OBN Foundation Fund, a donor advised fund, or DAF, which is a giving account that allows donors to make a charitable contribution, receive an immediate tax deduction, and then recommend grants from the fund over time. Donors can contribute to the fund as frequently as they like, and then recommend grants to their favorite charitable organizations whenever it makes sense for them. “A DAF made sense for us. It’s flexible and ensures that our donations go directly to students and to education.”

John and Pegah think they are among the first of their friend group to venture into philanthropic giving. “Young people like us are focused on launching their careers and settling themselves financially. Their hearts are wide open, but they might think the process is too cumbersome to tackle at this life stage,” says John. “Working with PCF, we realized how simple the effort was. It’s not a convoluted process. It seems like a big mountain to climb, but it’s not. It’s so worth it.”

Interested in making a difference with charitable giving in Pasadena?