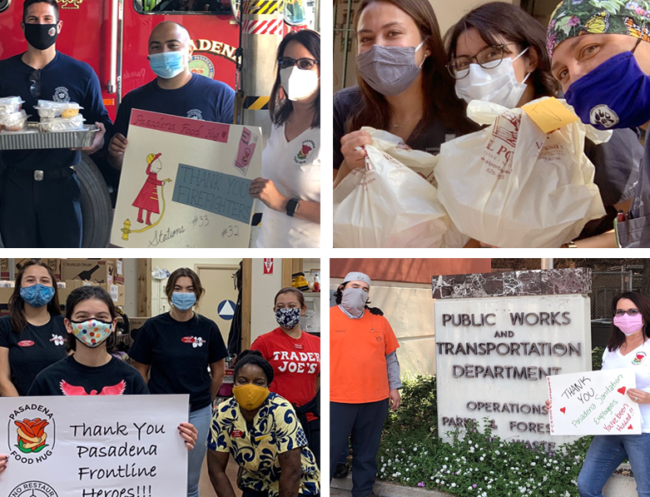 Food Hug buys food from minority owned restaurants in Pasadena and then delivers them to front line workers in a show of appreciation.

“Just because we can’t physically hug people right now, there are ways we can show our appreciation and support the essential workers who are out there doing their jobs and making a difference in our community,” says Trisha Muse explaining how a newly — formed non-profit is connecting two groups greatly affected by the pandemic.

Pasadena Food Hug provides meals (aka “food hugs”) to front-line heroes prepared from minority-owned restaurants in the city. Meals are typically ordered and delivered on Fridays around lunchtime. In August, using the services of five local restaurants, 685 meals were distributed — and more are planned for September. After recently delivering meals to a healthcare clinic, Muse received an email from one of the employees. “She told me that the meal ‘made her day,’” she said. “Well, reading that made my day.”

Muse, who has a day job as community relations for SoCalGas, has worked on similar established corporate programs feeding healthcare workers from local restaurants. Muse took that idea further by adding a social justice component of supporting minority-owned restaurants and, in conjunction with the Latino Restaurant Association, established Pasadena Food Hug in July 2020.

Since then, the small-but-mighty nonprofit has received $50,000 from Pasadena residents and local businesses; the Pasadena Community Foundation also financially supported the nascent endeavor with a $5,000 grant.

Muse also credits PCF President and CEO Jennifer DeVoll with introducing her to local organizations (including senior living/nursing homes, etc.) that employ essential personnel which she is adding to her ever-expanding list of people to thank. “The networking from PCF is invaluable,” she says.