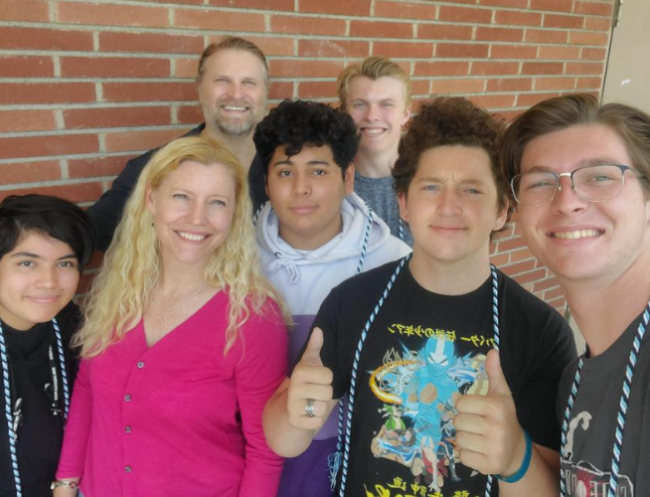 Math Academy, a signature Pasadena Unified School District (PUSD) program for middle and high school students, celebrated a happy milestone in June: Its first cohort of students, who helped jumpstart the program in 2013 as fourth graders at McKinley School, graduated from Pasadena High School and prepare to begin their college journeys.

Instilling a Passion for Math from the Beginning

Math Academy began when Sandy and Jason Roberts were asked to help coach their son’s fellow McKinley fourth graders for the 2013 Math Field Day. The students – 18 total –  were hooked, and by end of the year, they had learned most of the material found in pre-algebra.

For the 2014-15 schoolyear, Jason and Sandy were asked to teach this same group of kids in the form of a pull-out enrichment class, and soon the students were tackling algebra, geometry, functions, trigonometry, combinatorics, sequences and series, and even a little bit of calculus.  Superintendent Brian McDonald then asked Jason and Sandy if they would help create a district pilot based on their model, and together, they spent the next year formulating a program structure that would scale to various grades and skills.

That pilot became Math Academy, which instills in students the passion, skills, and insight needed to excel in the honors math and science programs of the most elite universities in the world. The program is now fully integrated into PUSD’s enrollment procedures and Math curriculum sequence and serves approximately 175 students across the district. Math Academy is made possible with help from the Robert J. Fefferman Initiative, which is a fund of Pasadena Community Foundation.

From Fourth Graders to Successful Graduates

The cohort’s graduation milestone is significant for Sandy Roberts. “We feel very fortunate to have been a part of these students’ growth over the years,” she says. “Watching them exceed our and everyone else’s expectations has been extremely rewarding. What they’ve learned has given them a tremendous head start for the next step in their education, and we are so excited to see what they accomplish in the future!”

PCF salutes the students who helped jumpstart Math Academy and wish them great success as they begin their college journeys this fall: